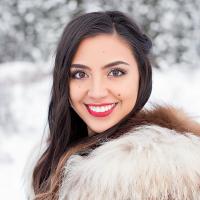 Denali Whiting is the Education Program Coordinator at the Alaska Humanities Forum, where she coordinates cultural immersion camps for educators preparing to move to and teach in rural Alaska. Denali was born and raised in Sisualik and Qikiktagruk, along the Kotzebue Sound. She holds a degree in Alaska Native Studies with a concentration in Alaska Native Forms of Cultural Expression, as well as a minor degree in American Sign Language from UAF. She is on the advisory committee for the Inuit Circumpolar Conference (ICC) Alaska Food Security project as well as the steering committee for the Caleb Lumen Pungowiyi Scholars program. Denali loves to spend time outdoors subsistence hunting and fishing, gathering, camping, and hiking. She has a special interest in Arctic issues and marine conservation.