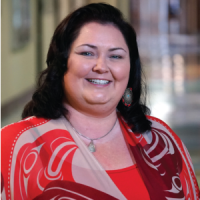 Dr. Todd is an Assistant Professor at the University of Minnesota Duluth (UMD) with a joint appointment in the Departments of American Indian Studies and Earth & Environmental Sciences. Prior to joining UMD in 2019. Prior to joining UMD she served as an Executive Branch as an American Association for the Advancement of Science, Science & Technology Policy Fellow hosted by the National Science Foundation (NSF) working across the Directorates for Education & Human Resources and Geoscience in the Division of Earth Science Systems.

Dr. Todd is a research geoscientist whose research focus is on examining microbial diversity, biogeochemistry, and biomineralization in metalliferious groundwater and marine ecosystems from deep-sea hydrothermal volcanoes to hydrothermal springs in Southeast Alaska and Yellowstone National Park and in examining environmental health and its impacts on Indigenous first foods. She is an Assistant Editor for the Journal of Geoscience Education.

Dr. Todd has partnered with her tribal community for over a decade coupling Traditional Knowledge with Geoscience to create culturally aligned K-12 science curriculum. She serves on the Board of Directors for the her tribal non-profit, Xáadas Kil Kuyáas Foundation a 501 (C) 3 whose mission is to promote, preserve, and perpetuate the Northern Haida language. Through her work she seeks to increase the number of Native American/Alaska Native students represented in STEM disciplines to increase diversity and innovation, and to empower the next generation of Native leaders.